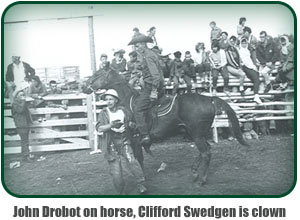 The history of Stoney Lake Stampede goes back to 1924 when promoter Steve Demchuk held the first stampede across the creek, just north of the present grounds. There was no fenced arena, bucking stock was released from the chute into the wide open spaces, winners were declared by who lasted longer—cowboy or bronc.

In 1932, the Stampede was held near the North Saskatchewan River. This site had an arena and the natural hill side was the grandstand. 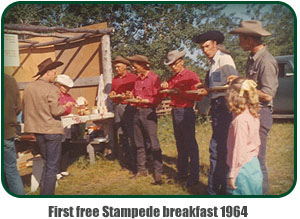 In June of 1963, a meeting was held at the home of John Drobot; also present were Mike and Steve Drobot, John Kiss, Walter and Ed Piotrowski, Steve Yakimowich, Steve Y Demchuk, Gunther May, and Edward Boratynec. They formed an Association and put up the dollars needed to construct an arena. On July 12, 1963, a one day stampede was held.

This ten member association held one day stampedes for the next ten years. In 1973, with 5 additional members, the arena was moved from private land to the Community Hall grounds and two day stampedes have been held to this day.